Who would have thought it. Chickpeas in a cake. Well actually James Reeson did. James who, you ask? Well back in 2002 he was the “celebrity chef” featured in the March delicious. magazine. Famous for his pony tail and a show called “Alive & Cooking“. No, still don’t remember??? Not so much a celebrity anymore. But he did come up with this genius idea to combine chickpeas and apricots into a cake. The combination intrigued me so I had to give it a go.

The chickpeas are blended with dried apricots and apricot nector so you can’t really pick up on their flavour. In fact, if I did a blind tasting with you I am sure that you wouldn’t even know that there was chickpeas in the cake.

The end result is a very mild tasting, beautifully moist cake. The next time I make it (and I will definitely make it again!) I might pimp it up a bit and add the zest of an orange and maybe replace the apricot nectar with fresh orange juice to reduce the amount of sugar in the cake.

Chickpeas are so incredibly versatile. Adding them to a cake was just a genius idea! 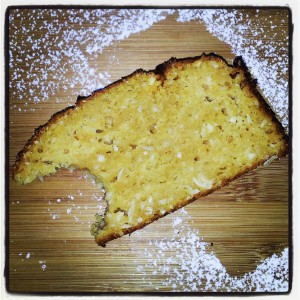 Place apricots and nectar in a bowl and set aside for 30 minutes to soak. Transfer to a saucepan over medium heat and simmer for 15 minutes. Add chickpeas and cook for 5 minutes. Set aside to cool. Place in a food processor and blend until a smooth puree. Add the sugar and blend for a few more seconds. Tip into a bowl and fold in the flour, coconut and a pinch of salt. Add the oil and 100ml water and stir to make a smooth batter.

In a separate bowl, beat egg whites until soft peaks form. Gently fold into batter until combined. Pour in the loaf pan and bake for 1 hour until a skewer inserted into the centre comes out clean. (If it browns too quickly, cover with foil.) Turn onto a wire rack to cool.

Dust with icing sugar and serve with thick yoghurt and a drizzle of honey, if desired.

I made an ugly cake…

So I made this ugly cake.

Well actually it was a brownie – a chocolate cheesecake brownie.

I should have known better. 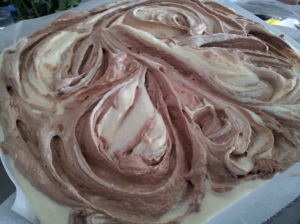 Here’s where it starts to get ugly

Here’s where it got ugly. There was SO much cheesecake mixture. It involved almost a kilogram of cream cheese after all! My gut told me that it wouldn’t all fit in the 24cm square cake pan suggested. I ignored my gut and just followed the instructions.

So I spent the next hour nervously watching it bake in the oven.

And as I expected, it slowly rose up, up, up and over like warm chocolatey lava. Disaster!

It didn’t help that I was in a hurry too. I had planned on taking the brownie out to my parents house for morning tea, but I was running late. After it broke its banks and oozed up and over that stupid little pan I switched off the oven and left it there. I would deal with whatever was waiting for me when I got home.

When I got home and opened up the oven, the brownie had kind of sunk violently in the middle with some serious chocolate hanging over the baking paper and cake pan. 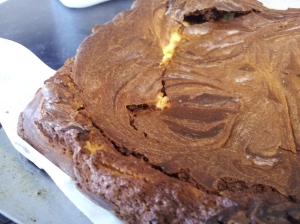 I left the cake to completely cool in the pan and then dragged it out. Things just got uglier…

Every time I tried to cut a nice piece to photograph and share with you lovely people, the cake cracked more, bits fell off, oh it was just a disaster! U-G-L-Y!

But, those little bits that kept falling off the cake kept falling in my mouth and, oh my goodness, they were yum! Chocolatey, gooey, chewy, sweet, cheesy, deliciousness!

In the end I hacked it into square like pieces and sent it off to work with Mr Picky Palette for his co-workers to enjoy. They didn’t seem to mind ugly cake.

Moral of the story:

Melt the chocolate in a heatproof bowl set over a saucepan of simmering water (don’t let the bowl touch the water). I melted mine in the microwave – it’s much quicker and uses less dishes!

Meanwhile, place butter and 1 1/4 cups (275g) sugar in a bowl, then beat with electric beaters until thick and pale. Add 2 eggs, one at a time, beating well between each. Add melted chocolate and flour, then continue beating until well combined.

Spread two-thirds of the chocolate mix in the pan. Set remaining mixture aside.

In a separate bowl, beat the cream cheese and remaining 3/4 cup (165g) sugar with electric beaters until smooth. Add the remaining 2 eggs, one at a time, beating well between each addition.

Bake for 1 hour and 15 minutes or until the centre is just set. Cool completely in pan, then carefully remove from the pan, transfer to a board and cut into 16 squares.

The cake that nearly broke me

Under normal circumstances I would never attempt a cake like the Summer layer cake, the cover recipe from the February 2012 issue of delicious. magazine. However, you may recall that when I started this little project, one of my “ground rules” was that I would cook every single cover recipe. This whole exercise was designed to push me out of my comfort zone and cook things I would ordinarily deem too hard.

The plan was to make the cake for my birthday, a Wednesday. But the night before, during a quick scan of the recipe to ensure I had all the necessary ingredients, I came across the dreaded words “Begin this recipe a day ahead”. I was not off to a particularly good start. There would be no birthday cake.

As it turns out, I got busy and I didn’t end up starting the cake until Friday.

The first stage was making the cake and berry mousse which would be sandwiched between each layer of cake. This stage was pretty straight forward, except that I don’t own two springform pans. And the one I borrowed from my mother was a different size to mine. This is kind of critical when you are making a multi layered cake that would set overnight in said pan. In the end I made do using three pans almost the same size and hoped for the best.

Having had a terrible incident with smoke and electricity (and a trip to the bin) with my own mixer late last year, I borrowed my mother’s beautiful vintage Sunbeam mixer. I would say it is over 40 years old, but it is still working as new. They certainly don’t make them like they used to. 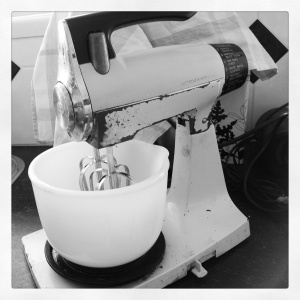 The cake is the usual cream butter and sugar blah blah. No drama there.

While the cake was baking I got on to making the berry mousse. It’s quite a simple process of mixing together strawberries, raspberries, cream and gelatine. The trick is to gently fold the whipped cream into the berry puree and keep the mixture light. This was so good. I could actually have eaten it on its own. No volunteers required for bowl licking here!

What came next was a whole lot of cutting, trimming, glad wrapping and finger crossing. I had to cut one cake in half and slice the top off the other two to make them all about the same size. I glad wrapped the cake pan I baked one of the cakes in and then put the first layer of cake into the bottom, topped it with a third of the berry mousse mixture and repeated to make four layers of cake and three layers of mousse. It was then sealed with more glad wrap and tucked up into bed in the fridge over night.

The next afternoon I finally got the courage to finish the cake off. In my eyes this was the hard part – making the marshmallow icing and assembly.

I have never come across a marshmallow icing recipe before, but this is a revelation. Since I made it I have been trying to come up with other uses for it (I’m thinking cup cakes!!!). It is a bit of a process to make it, but well worth it. Over a double boiler on the stove you whisk the egg white, sugar and cream of tartar until the mixture kind of doubles in size and becomes frothy. You then add the chopped up marshmallows and transfer it over to your mixer and beat it at top speed for about ten minutes until it becomes thick, pale, shiny, cool and DELICIOUS!!! 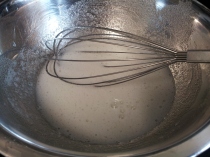 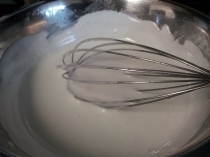 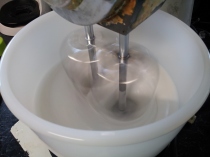 As for the final stage of assembly, well, um, it tasted good!

I wasn’t thrilled with how it looked in the end. It wasn’t anywhere near as pretty as the original in the delicious. magazine.

I think each of the layers were quite even, I was happy with that. I found that I had to work pretty quickly to get the marshmallow icing on as I noticed it starting to slide off the cake. I also failed to get the dessicated coconut onto the sides of the cake. Not sure how they managed that one… 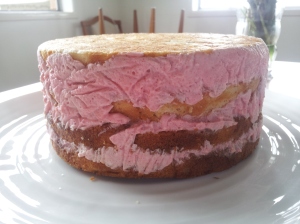 Before the marshmallow icing 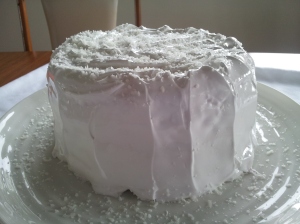 So four days after originally planning to be eating cake, we finally sat down and tried it. 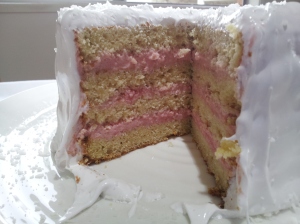 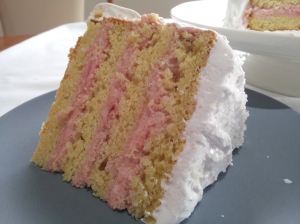 It may not have been that pretty. It may have taken two days. I may have had to adapt the recipe a little to fit in with the equipment I had. But I did it! It didn’t break me! But it was hard work!

I’ll leave it up to B2 to sum up for you how the cake actually tasted. A picture tells a thousand words… 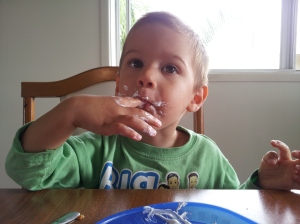